Are you kidding me? I just found this in the forrest and cooked it up with onion, garlic, cream, ham, sea salt and pepper. Let the healing begin:

Boletus edulis fruit bodies contain about 500 mg of ergosterol per 100 g of dried mushroom.[124] Ergosterol is a sterol compound common in fungi. Additionally, the fruit bodies have about 30 mg of ergosterol peroxide per 100 g of dried mushroom. Ergosterol peroxide is a steroid derivative with a wide spectrum of biological activity, including antimicrobial and anti-inflammatory activity, and cytotoxicity to various tumor cell lines grown in laboratory culture.[125]

Phytochelatins give B. edulis resistance to toxic heavy metals like cadmium.
The mushroom also contains a sugar-binding protein, or lectin, that has affinity for the sugars xylose and melibiose. The lectin is mitogenic—that is, it can stimulate cells to begin the process of cell division, resulting in mitosis. Further, the lectin has antiviral properties: it inhibits the human immunodeficiency virus enzyme reverse transcriptase.[126] Other studies suggest that B. edulis also has antiviral activity against Vaccinia virus[127] and tobacco mosaic virus grown in culture.[128] Antiviral compounds from mushrooms are a subject of interest in biomedical research for their potential to advance the knowledge of viral replication, and as new drugs in the treatment of viral disease.[129]

The fruit bodies have a high antioxidative capacity, due probably to a combination of various organic acids (such as oxalic, citric, malic, succinic and fumaric acids), tocopherols, phenolic compounds[130] and alkaloids; the highest antioxidant activity is in the mushroom caps.[131] Furthermore, fruit bodies were determined to have 528 mg of the antioxidant compound ergothioneine per kilogram of fresh mushroom; this value was the highest among many food items tested in one study.[132] Porcini were thought to have anti-cancer properties according to Hungarian research conducted in the 1950s,[133] but later investigations in the United States did not support this.[94] 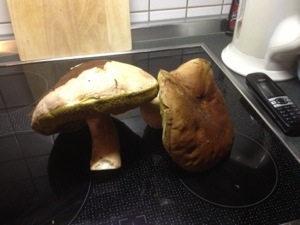